This post is about the Imperial March piano arrangement for the beginning piano student (children that already enjoyed 1 to 2 years of frequent piano lessons).

It includes my three part video training series that shows how to learn and play the Imperial March Theme (Part 1) from Star Wars on the piano.

Imperial March Piano Training Video 1 shows how to play the piece with both hands in different tempi, and is great as a play along. Imperial March Piano Training Video 2 shows how to learn and perform the melody with the right hand. Imperial March Piano Training Video 3 shows how to learn and play the accompaniment part with the left hand. In video 2 I simplified the rhythm in the melody a little bit. Once the pupil masters the melody as taught in video 2, it is time to replace the two consecutive 8th notes with a dotted eighth note followed by a sixteenth note, as shown in the image below. (The top staff shows the new version).  It is a little more challenging to play, but it is the original melody after all.

Exercise for performing from chord charts

In popular music we use chord symbols to indicate the harmony of a song. One of the most important skills for a contemporary pianist to have is performing from lead sheets (melody + chord symbols) and chord charts.

The following images show two versions of the left hand accompaniment of the Imperial March arrangement.

On the left you see the actual written out arrangement with chord symbols added (click on it to enlarge the image).

On the right you see a chord chart with chord symbols and slashes only.

Tip: The slashes indicate the beats in the measure. (Quarter notes in our example). IMPORTANT: A chord symbol is valet until the next chord symbol appears. I arranged it for my beginning piano students. It is suited for children that already took lessons for at least 1 year.

Here is my video tutorial of the songs that shows me playing.

This video shows how to play Beethoven’s Ode To Joy with the right hand only. This is a nice piece that features a left hand accompaniment which alternates between different fingers and the thump.

Check out my video below. It includes also a practice tip, that helps the student to first master the note changes by simplifying the left hand.

Etude in G by Karl Czerny

This nice song features the famous “Alberti Bass” figure in the left hand which is an accompaniment pattern used in countless pieces.

Definition: Alberti bass is a kind of broken chord or arpeggiated accompaniment, where the notes of the chord are presented in the order lowest, highest, middle, highest. This pattern is then repeated.[1] The broken chord pattern helps to create a smooth, sustained, flowing sound on the piano.

The video shows me playing the song. It includes a play-along section that allows the student to perform along with the recording playing only one hand at a time. 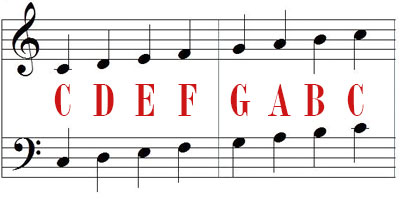 This is a popular German lullaby. I arranged it for my beginning piano students.